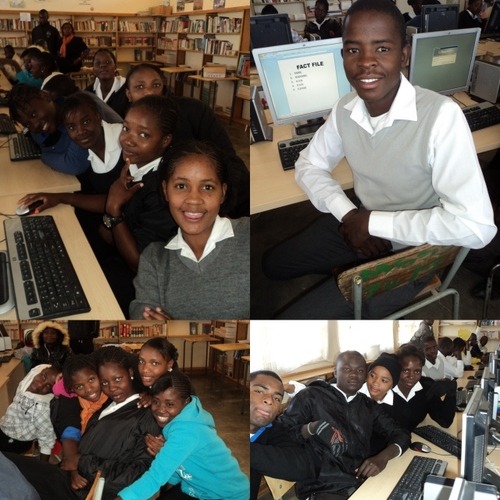 Wow, today was my first day of teaching in Opuwu, Namibia. Interesting  day. Lastnight I didn’t sleep well, everything hit me at once. I haven’t slept anyway since my Family’s loss, but I wanted to at least rest before the first day. We went into the staff meeting at 6:40 am, everyone was happy to have me there, and we started the day off well. The learners (what they call students in Namibia) are very funny and interesting. Again, they thought my name was funny, but I didn’t mind, they were very respectful and wanted to learn all about me. Being that they are high school children, they still act goofy and silly, but very respectful at the same time, it’s interesting. They introduced me to all the classes, then I went to the computer lab where I’ll be teaching. Different classes came to me all day long. The questions these kids have are funny. “Have you met Chris Brown”? one kid asked. Another kid mentioned that he “wanted to live that G life”. I asked him why he said he wants to struggle but not get shot, he wants the money!! Of course I told him that wanting the G life was no aspiration in life and I told him that I don’t ever want to hear him say that again. These kids just had so many questions about America, one girl even thought that I knew all the celebrities because she thought they walk around in the street all day. Can you imagine?

The school I’m teaching at is a boarding school so their parents send them there and pay for them to go. I know that they do not learn much Namibian history until the fifth grade but the ones they knew were really based on their parents knowledge from what I can perceive, they made a lot of reference to what their grandmother or mother told them (that is not a definite statement, it’s still only my first day) I was and was not surprised to see that there were not many history books or books about Namibia but a lot of history about Russia, Europe, and Britain. There was like one or two books that said Namibia. With that being said, I found out some things about Namibia from the children who grew up in traditional Himba or Herero homes. The school is made up of mostly those two tribes. After introducing ourselves, and them asking me questions about myself and where I come from, I asked them to tell me about Namibia, they were all anxious and didn’t want to wait their turns to tell me things. One girl told me that Namibia is in the top ten of one of the most peaceful countries in the world. Another told me about the beauty of the country and that I should “not be afraid of Namibia”. Not that I was but she told me anyway. Another told me about the history and how when the Germans colonized them, they killed all the cows (which was their source of wealth) and raped the women. She pointed to a lighter-skinned girl in the front of the room and said ‘this is why you see people that look like her skin color because the Germans raped the women”. The light-skinned girl didn’t get mad at all, she agreed!

On a more positive note, the kids told me that the concept of age in traditional Himba cultures was one that was confusing. One kid told me he had two birthdays, he said because traditional Himbas don’t always follow the western concept of age, they may see that the year a child was born, there was a lot of rain, so when the child asks ‘how old am I” the grandparent will tell them, “you were born in that year when there was a lot of rain”. And they calculate it somehow (by this point I was lost). Then I asked ‘whatif there were three years in a row with the same amount of rain”? another girl responded and said it doesn’t matter if it’s three years, they all fall under the same category ( I was still lost) I say grandparent because what I found out during training was that some people in traditional Herero and Himba tribes get married, have children, and leave them with the grandparent, while they  go and work. This is not in all cases, but a lot. I guess when people in traditional villages get work in more urban areas, they leave the kids behind so they can get the most out of their career (according to the historian we spoke to during training).

So now that I’ve confused myself and all of you. Let’s talk about some more things that happened today.  I had so much fun getting to know these children, even one learner gave me a bracelet so that I will remember her, it’s a traditional local made bracelet & I love it. Another  girl learner told me “miss I love you” when she saw me later in the day. It is a boarding school so where I live is next to one of the girls dorm halls, all the girls walk by and say “hi Miss”, “how are you miss”. It’s so nice to be around some respectful children. Even if they misbehaved, they immediately straighten up and feel ashamed when they are corrected, and they say “yes miss, sorry miss”. There were a couple bad apples though, a kid threw a pen at someone else and it hit me, I had to bring him to his teacher, I didn’t want to but I had to let him know that bad behavior was not acceptable. Bad behavior is not tolerated in any sense in Namibia, I wanna say that for most African countries bad behavior is not tolerated from children.

Lastnight all of my emotions about my Auntie hit me hard.. I considered going home and all that. I haven’t slept well since the news. I don’t want to sound cliché but I still don’t believe it. Today when work was over, my housemate was administering a test after hours and asked me to help. I had to read an excerpt to the children that involved boats sinking and planes crashing. I wanted to stop reading the test then and there but I couldn’t. I don’t want to read about crashing planes especially when that’s what took my Aunt & cousin’s life. I just feel like even going home or to Nigeria to cry in someone’s arms. My Mom and Dad comforted me and told me to stay here and keep going strong. If I cry here, nobody can be there for me that truly knows what I feel. So I’ve been trying to hold on as much as possible until I can really grieve 😦 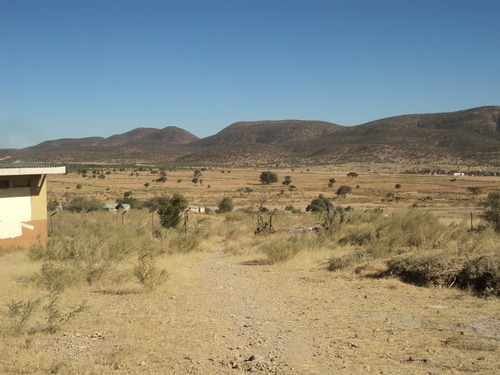